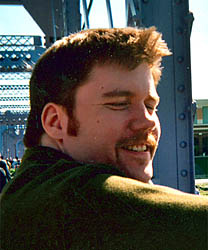 Christopher Sabine is an adult with Optic Nerve Hypoplasia currently living in Cincinnati, Ohio. He graduated magna cum laude from Wright State University in 1996 with a Bachelor’s degree in Social Work and received his Master’s degree from the University Of Cincinnati School Of Social Work in 1997 with a specialization in human service administration. He worked for five years as a case manager for adolescents with a variety of disabilities and special health care needs as a service coordinator and case manager. His work involved developing service plans that address each child’s individual needs, supporting children to develop a vision and goals for the future, and working with families, schools, and disability and health care professionals to achieve that vision.

Mr. Sabine has attended and participated in numerous Individualized Education Plan (IEP) meetings in his role as service coordinator. He has been active on numerous local, state, and national organizations charged with the needs of urban youth, people with disabilities, and other minority populations. He has served on the Board of Directors of the Autism Society of Cincinnati. In This capacity, he helped shape policy and service delivery for children and adults with Autism in Ohio through his role as local representative with the Ohio Autism Coalition.

Mr. Sabine has lived a lifetime of experience with Optic Nerve Hypoplasia. He is significantly visually impaired and uses a white cane, reads Braille, and operates a computer with software called JAWS that reads the screen in a synthetic voice. He received eight years of occupational therapy for sensory integration dysfunction as well as extensive training to enable him to perform many basic life skills using the alternative techniques of blindness. Like many people with Optic Nerve Hypoplasia, Mr. Sabine has some Autistic tendencies and some special skills that are unique to him. For example, he can still do some long multiplication problems in his head and knew every area code in North America prior to 1995.

His unique insights into life with Optic Nerve Hypoplasia have assisted many parents to better understand their children’s unique characteristics and develop effective strategies to enable them to thrive.

Mr. Sabine’s hobbies include writing, playing computer games and listening to Progressive Rock music. He currently serves as Secretary of the Cincinnati Chapter of the National Federation of the Blind of Ohio and works to promote access to quality education for Blind youth statewide. A practicing Catholic, Mr. Sabine has served on his parish's pastoral council and works with the Archdiocese of Cincinnati to promote access to the Mass and litergy for parishioners who are blind or have other disabilities.
Below are some writings by Mr. Sabine:

In Memory of Karen Carpenter

A Quest to Connect

Resources
God Taught Tom: The Story of one of the Greatest Pianists of the Nineteenth Century and Why I will Never Call him a Savant
Our Services
Contact Us
Destroy the Virus, Mitigate the Fear: My reflections on the Covid-19 Pandemic
Special ONH Consulting Newsletter on Areas of Special Interest and Perseverations